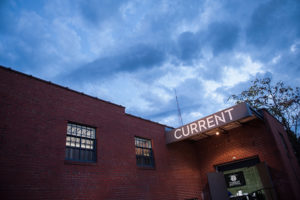 How does running an art gallery in a small market attract new and young collectors to the art world?  That was the question that art galleries in Richmond, Virginia were asking.  The problem was engaging young people and those who have never purchased art or visited an art gallery or other visual art organizations in the area.  This problem is not unique to Richmond.  Gallerist all over the world struggle with the same thing.

Richmond is home to a major art school, Virginia Commonwealth University and has vibrant museums and arts centers.  The city is also home to around 25-30 commercial art galleries that offer artworks from local, national and international artists.

The gallery community was looking for a way to overcome the intimidation factor of visiting an art gallery and to simply provide easy access to see art and ask questions.  Last year seven Richmond galleries banded together to collaborate on the creation of an art fair.  There is no art fair in the Mid-Atlantic region and the fair format has been successful in major art cities.   And thus, the Current Art Fair was born.  The fair is on its second year now.

They were realistic for the inaugural event and kept gallery participation small with only seven local galleries.  They wanted to see if they could be successful locally first and then plan for growth.  Smart. Sponsors were also brought in to help with the costs.  Smart again. 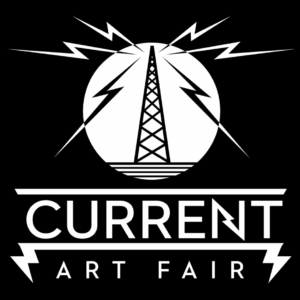 The fair’s branding was well thought out.  The name definitely has a local tie-in to the James River that flows through the center of the city and being a contemporary art fair, Current is also a nod to the idea of the new.  The well-known name (even to non-art followers), Shepard Fairey was commissioned to design the logo that was inspired by a local landmark TV tower that was visible from the fair’s first location.  It’s a visual idea of an electric spark that contemporary art brings to the community and our lives.  All the participating galleries were actively promoting the event and the fair got good local press coverage.  Social media efforts were active across the art community both before the inaugural event and between the 2016 and 2017 fairs.

I went last year to the $50 ticketed preview party and it was packed.  So was the free public day that I attended.  It was held in a trendy new industrial area of town.  Gallery feedback was positive.  They were meeting new people and some sales were being made.

This year the initial galleries decided to expand a bit.  The

event was held in a larger location to accommodate their expanded list of galleries and newly added programs.  The preview party sold out.  (Note to self – Don’t wait so long next year to get your ticket)

Gallery participation went from seven to sixteen exhibitors and cultural partners which included galleries from nearby Virginia cities and non-profit art organizations.  Programming was also added to help both new and seasoned collectors further their understanding of what the area’s art market and community has to offer.  Programs for the 3 day fair included

We all know that running an art gallery today requires fresh ideas and ways to connect with and attract new and young collectors.  The Current Art fair is a good example of how galleries in a smaller market can take a successful format in larger art markets and make it their own.  The event had a good vibe with food trucks and refreshments.  The programing enticed people to stick around longer and really explore the artistic community of their city. 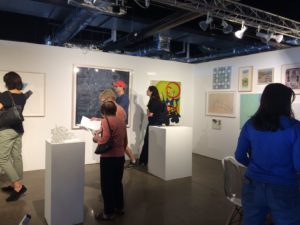 Given that their goal was to engage with people who may otherwise be intimidated to visit a gallery, I would have liked to have seen consistent labeling of art works in all the booths.  Some had wall labels next to each piece and others required a curious viewer to find a printed price sheet on a crowded booth table.  Another observation was it was often difficult to tell who was a fair visitor from who actually worked at the gallery.  Name tags or some other defining sign would have been helpful to encourage asking a question.  Gallery artists were also in attendance.  Being able to identify who was who might have been helpful to the events goals. However, I did see several red dots, so sales were being made and I hope more followed after the event.

There are lots of ways for art galleries to collaborate for the benefit of not only their businesses but also for the health of the artistic community from which they operate.  Other recent examples of collaborations have included bringing artists from galleries in another region to show for certain period of time in a new market, such as what is happening in Los Angeles at proyectosLA or the innovative concept of Condo where galleries lend their space.  Both these collaborations are all about gaining exposure within new markets.  Another recent gallery collaboration that, like Current, was aimed at attracting a local audience and those new to the art world was Good to Talk.  This event was organized by a handful of young art dealers in Berlin and 20 galleries participated.  This collaboration format was a 46 hour content driven marathon the weekend before Berlin Art Week.  Programming included panel discussions, dance and musical performances and films. 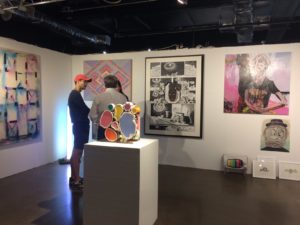 It’s exciting to see so many new formats being tried by the vulnerable small to mid-market art galleries.  The Current Art Fair will likely remain a Richmond event in the future and continue to grow and expand.  It is a format that could be repeated in other cities and be tailored to appeal to local market needs.

Do you collaborate with other gallerist in your area?  Share what you are doing to attract new and young collectors.

You may also enjoy these related articles:

How to Run an Artist / Gallery Social Media Collaboration Campaign

How to Create a Smart and Straightforward Art Gallery Marketing Plan

This site uses Akismet to reduce spam. Learn how your comment data is processed.

Any cookies that may not be particularly necessary for the website to function and is used specifically to collect user personal data via analytics, ads, other embedded contents are termed as non-necessary cookies. It is mandatory to procure user consent prior to running these cookies on your website.